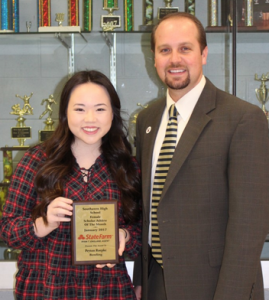 The Ryan England-State Farm Female Scholar Athlete for January is Peyton Roepke. Peyton is a senior member of the SHS bowling team. She has a 4.29-weighted GPA and is currently ranked 12th in her class of 412. She has achieved a 29 on the ACT. Coach Quinn said, “Peyton’s hard work in the bowling alley is the reason she has improved tremendously throughout the season. More importantly, her hard work in the classroom and around the community and school has made her stand out to her peers and teachers! Peyton has been a true joy to have on the team.” 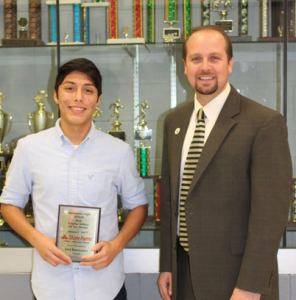 The Ryan England-State Farm Male Scholar Athlete for January is Joel Barrientos. Joel is a senior member of the soccer team. He has a 4.0 GPA and is ranked 62 out of 412 in his graduating class. Joel has a 24 on the ACT. Coach Young said, “Joel always worked hard and set a good tone for the entire team. He improved each year and was a good leader for this year’s team.”