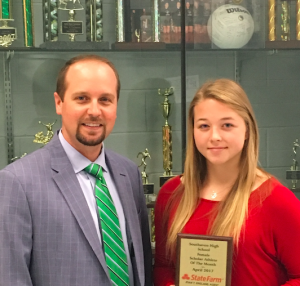 The Ryan England-State Farm Female Scholar Athlete for April is Valerie Dalton. Valerie is a senior member of the SHS softball team. She has a 4.16-weighted GPA and is currently ranked 10 out of 410 in her class. Valerie has scored as high as a 25 on the ACT and has signed to play softball for Itawamba Community College next season. Coach Staten said of Valerie, “Valerie is a hard worker on the field and in the classroom and is at the top of her class. I’m proud that she was able to sign a scholarship to continue playing next season.” 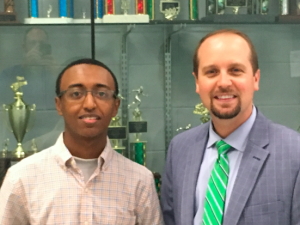 The Ryan England-State Farm Male Scholar Athlete for April is Antoine Tebeje. Antoine is a senior member of the golf team. He has a 4.72-weighted GPA, currently ranked number one in his graduating class and has achieved as high as a 32 on the ACT. He has also received a full academic scholarship to Vanderbilt University next year. Coach Tucker said of Antoine, “Antoine epitomizes the true definition of a student-athlete.  He works as diligently in the classroom as he does on the golf course.  Antoine has played golf for four years and always put the team first.  I consider it an honor to have coached Antoine.”